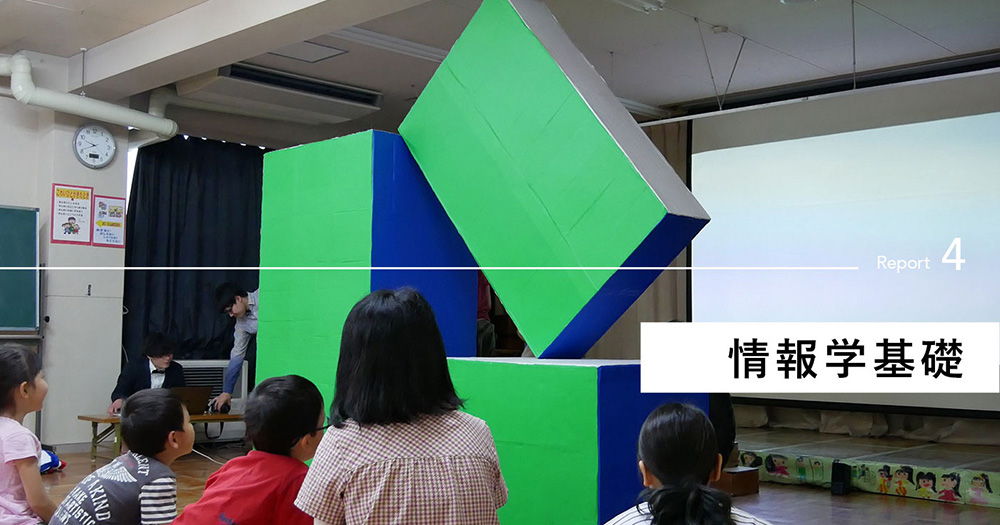 Over the course of about two weeks from May 2 to May 19, 2017, first-year IAMAS students participated in the “Information Studies Foundations” class. This year’s work centered around using accelerometers outfitted with wireless tags capable of sensing body movement (for the rest of this report we will call them “sensors”) to create games for children. The students decided whether their game would involve affixing these sensors to some sort of implement, or having participants wear them on their bodies. They considered how to use the data collected by the sensors, what the output of their work would be, and what form of media it would take.
For any particular game, there are multiple ways to play. The “games” that students created in this class focused on connecting the plasticity and flexibility of conventional games with the imagination and creativity of kindergartners. In particular, students were conscious of the fact that a “game” and an “opening” are the same thing; openings allow the players to independently create ways of playing.
The IAMAS students split into five groups, came up with ideas for workshops in which participants would play the games, wrote programs and installed the sensors that the games would incorporate. Finally, we held two workshops for a group of 13 kindergartners. The aim was for students to acquire information-engineering skills through the process of creating

We used “Processing” to learn the basics of text-based programming, and students learned to relate to programs through simple assignments. There was an environment of mutual learning within the groups, with members teaching one another about the codes. After learning about sensors in class, students executed sample programs that had been prepared in advance, and, by editing and adding to these samples, students learned to assemble programs based on the characteristics of the sensors and systems in which they were interested. Finally, students presented their individual programs.

Once students had a grasp of sensor programming, they went to visit Ogaki East Kindergarten. By observing how the children played, students could find out what kindergartners were interested in, while getting a sense of how to communicate with them. This was a chance to make the workshops that the students were planning more meaningful. Finally, students talked with the kindergarten’s principal to deepen their understanding of how children play. 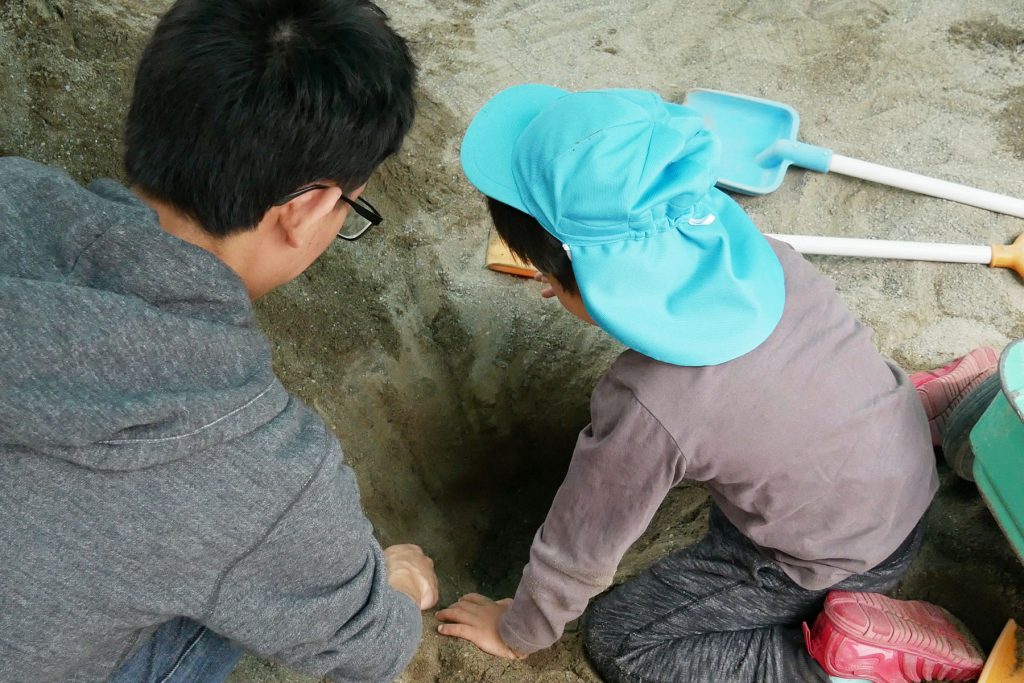 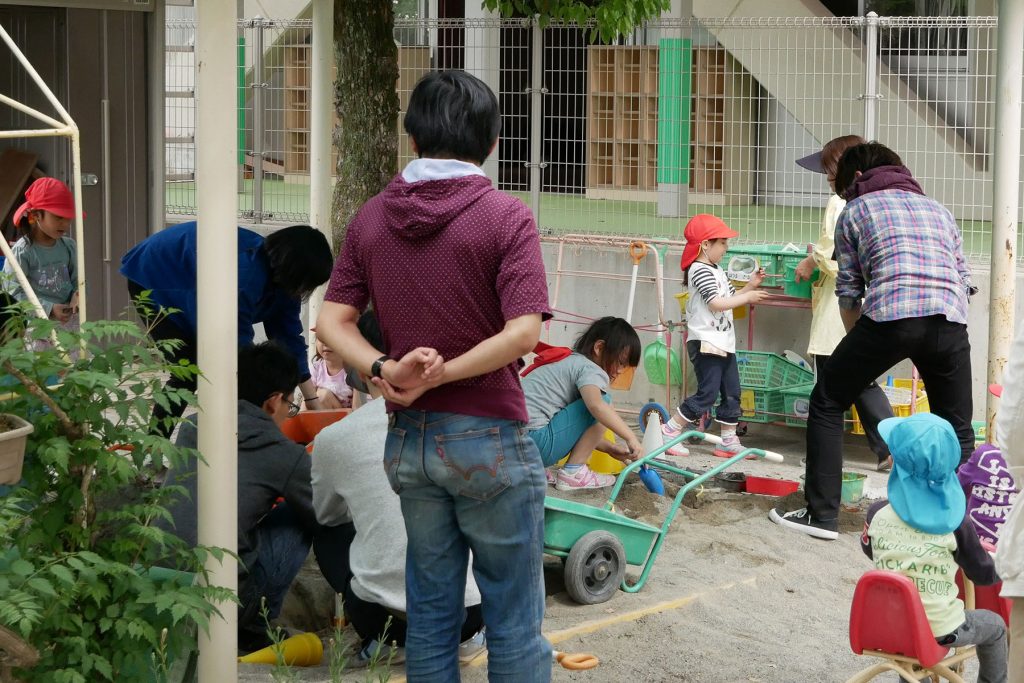 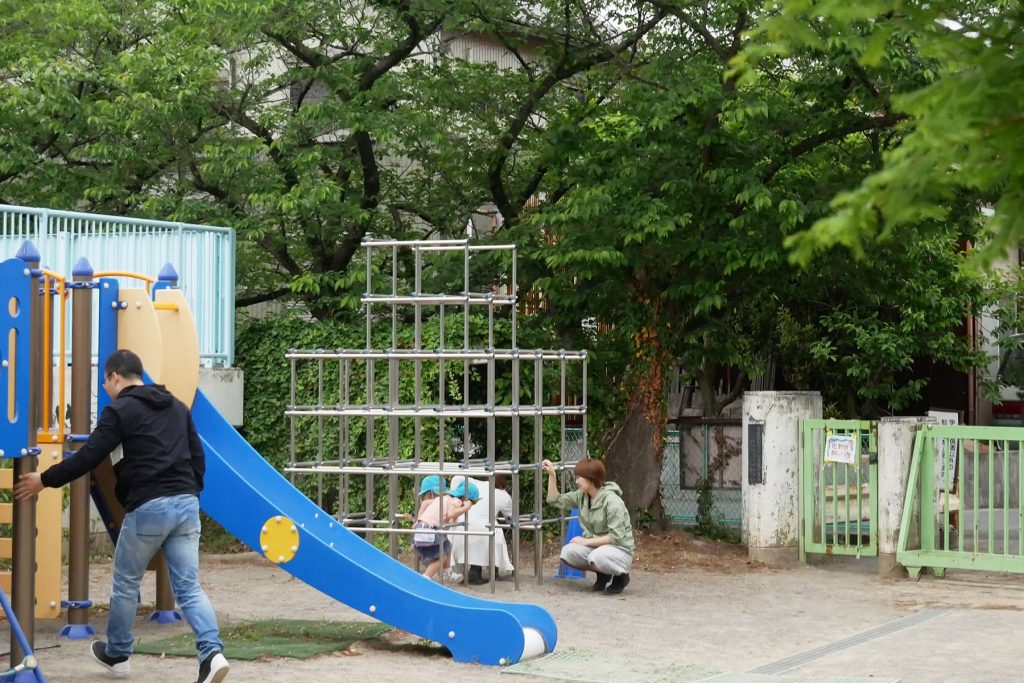 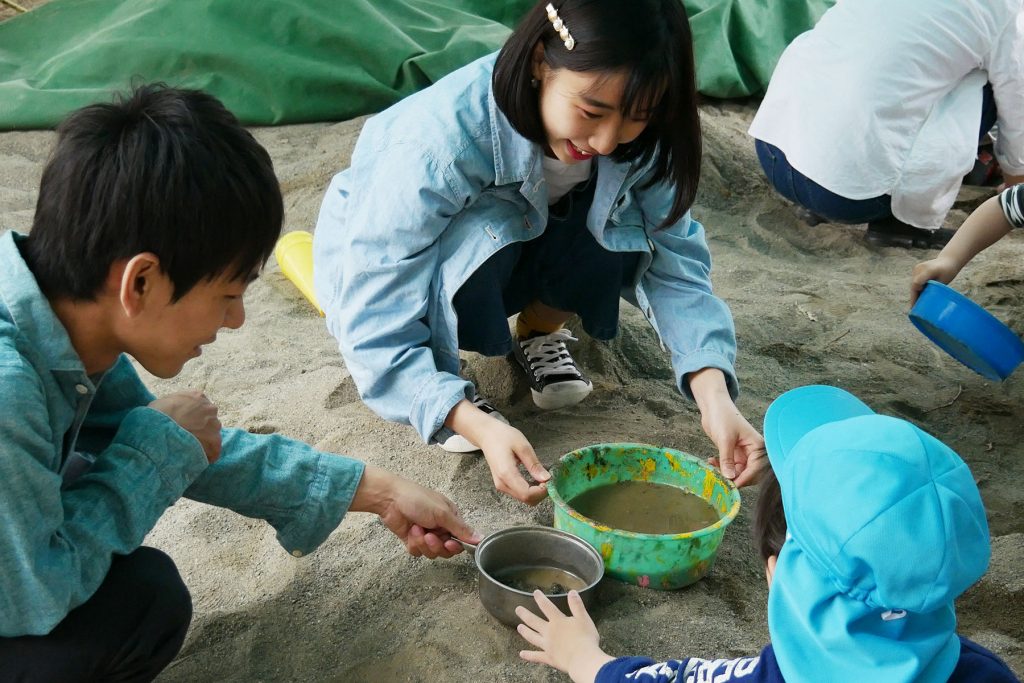 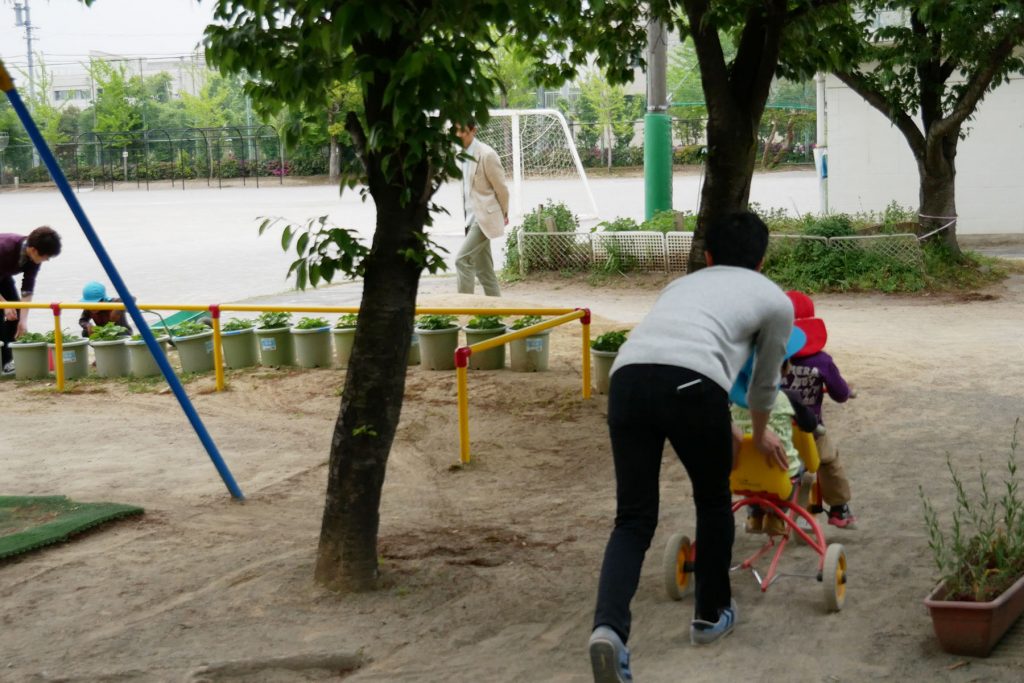 As students set about planning their workshops, we took another opportunity to think about “games.” We did not limit our thoughts to games with predetermined rules, but focused on the fact that games also include discovery as well as trial and error. This can be observed when the players create rules themselves, and can be seen in the space between physical activity and responses to it. In this way, we affirmed the flexibility and potential for expansion that games possess.
We learned about J. Piaget’s three types of play: 1.) Sensorimotor play / exercise play 2.) symbolic play and 3.) regulation play, and looked at what children gain from each of these varieties based on their stage of cognitive development. At the same time, we observed how each of these three elements exist alongside one another, referring to Pieter Bruegel the Elder’s painting, Children’s Games.

During our visit to the Kindergarten, we observed what children were interested in, and to what extent they could understand rules. Using these observations, each group proposed workshop ideas. Rather than focusing on how to get children to participant, groups considered what children would feel and what they would find interesting about the game. In addition to first presenting and considering their plans within the school, each group tested their workshops by holding them for members of the IAMAS community.

The five groups held their workshops over the course of two days; 5/16 and 5/18. Each workshop lasted 20 minutes including preparation and clean-up time.

Children put sensors on their arms or legs; when they tilted the sensors, a program caused shapes to move or colors to be painted on a projector screen based upon how they moved. After this, the children’s movements were played back using a camera recording and information collected by a Kinect depth sensor. This allowed the children to observe body movements that they had previously been unaware of. An interesting aspect of this project was the fact that, in attempting to match their body movements with the onscreen shapes, the children were able to gain a new awareness about how they moved. 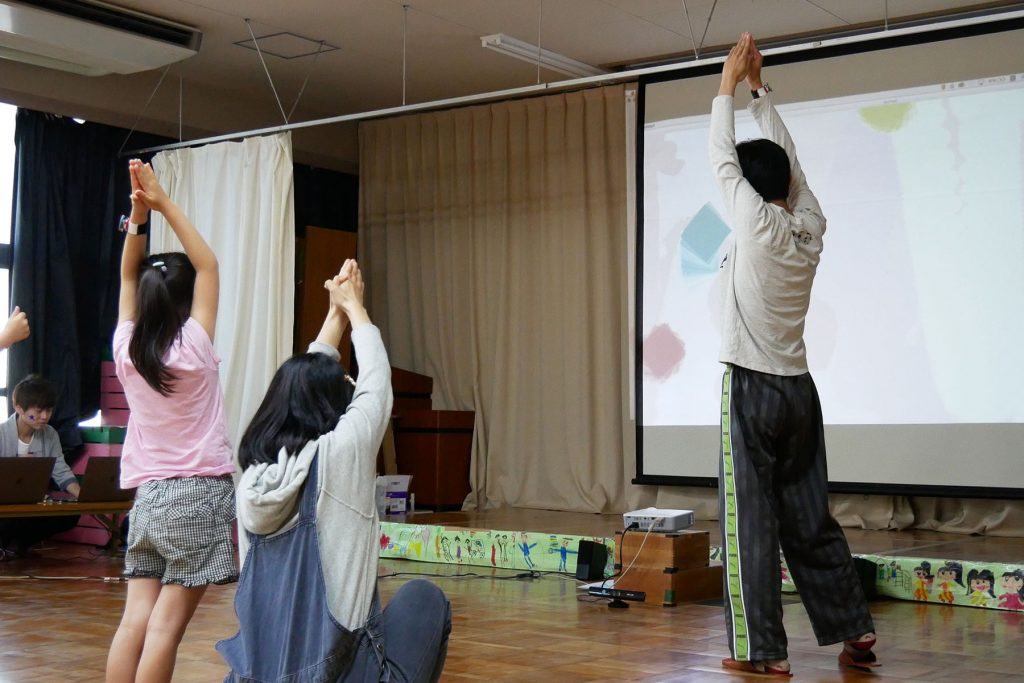 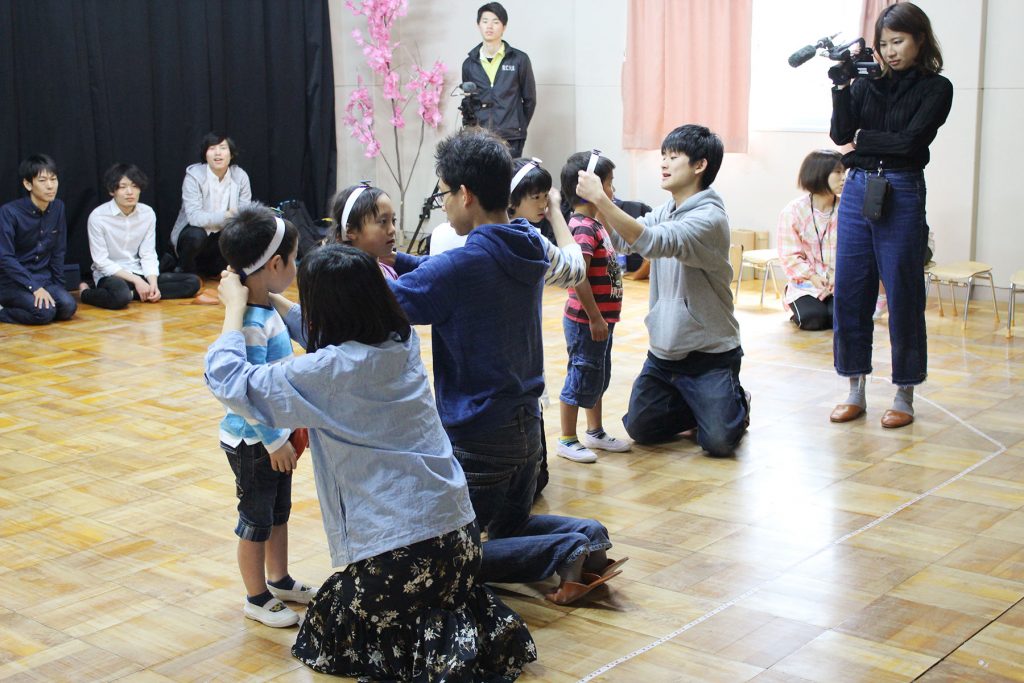 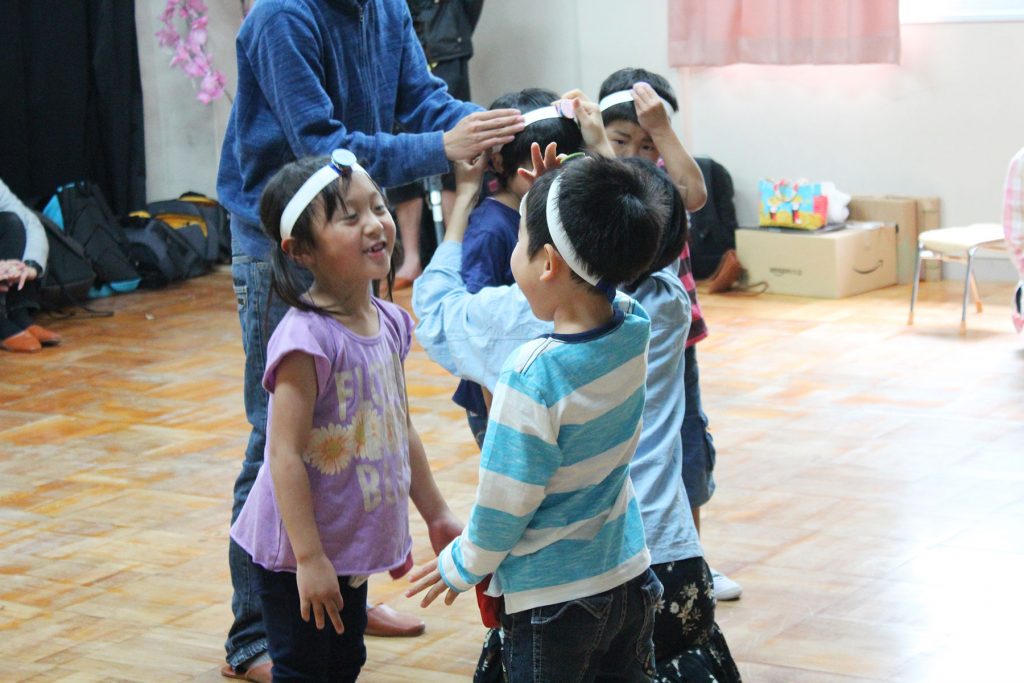 Sensors were attached to three six-sided boxes, each of which was bigger than the children. Depending on which side was touching the ground, a projector screen divided into three sections would change color and a sound would play. When all three sections became the same color, a peculiar change would occur on the screen. For the children, the boxes were very big, so they began working together to knock over or drag the boxes around. Particularly striking was the fact that the children independently came up with the idea to match the colors, creating rules for their game. 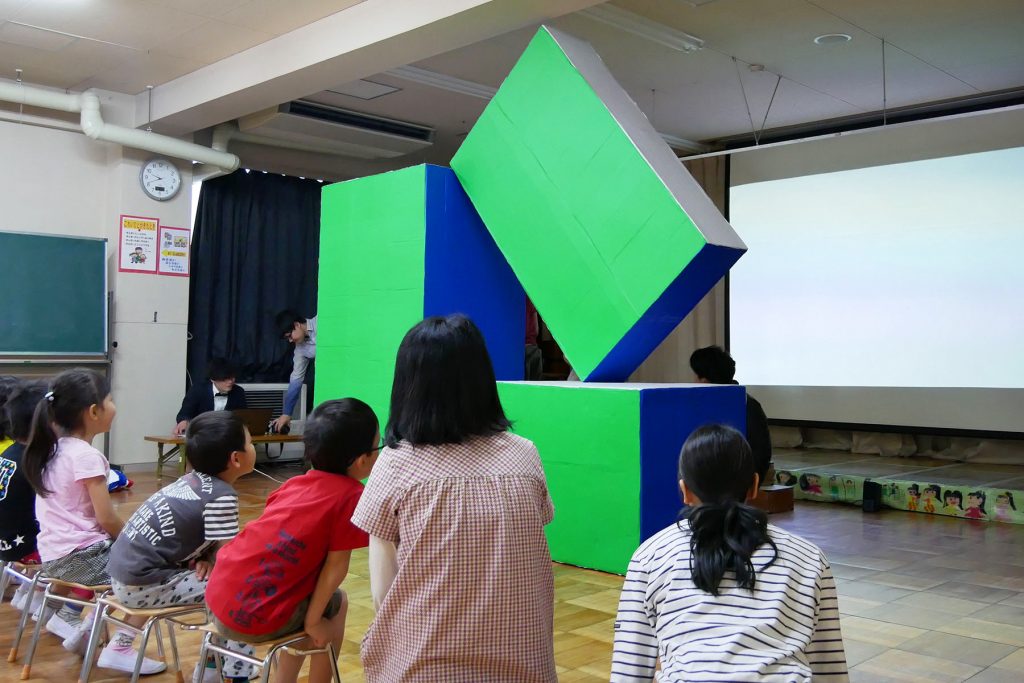 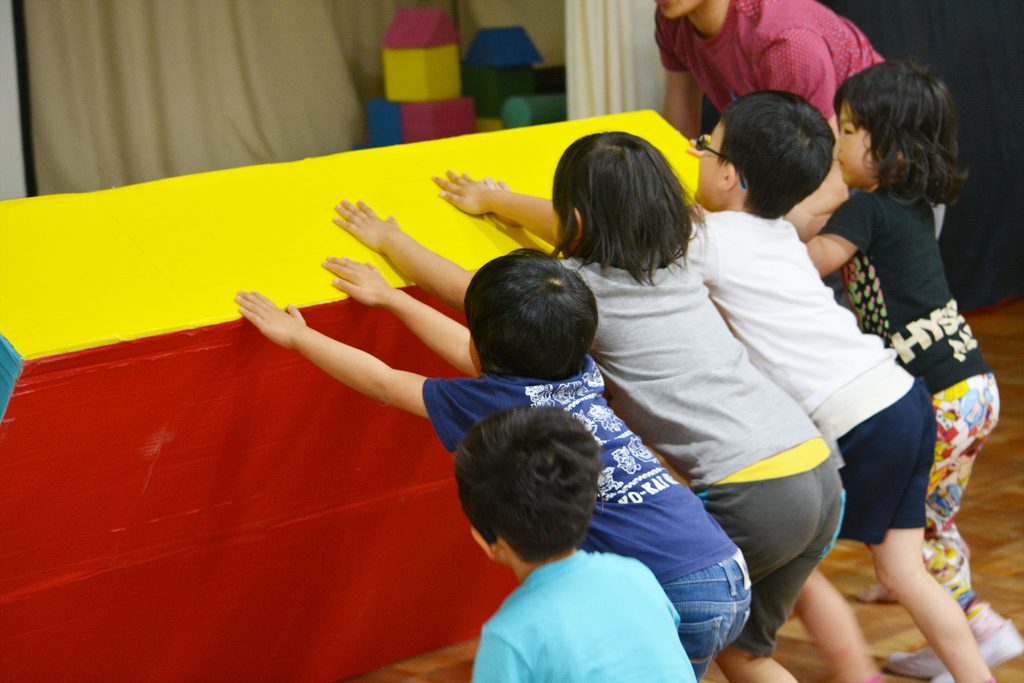 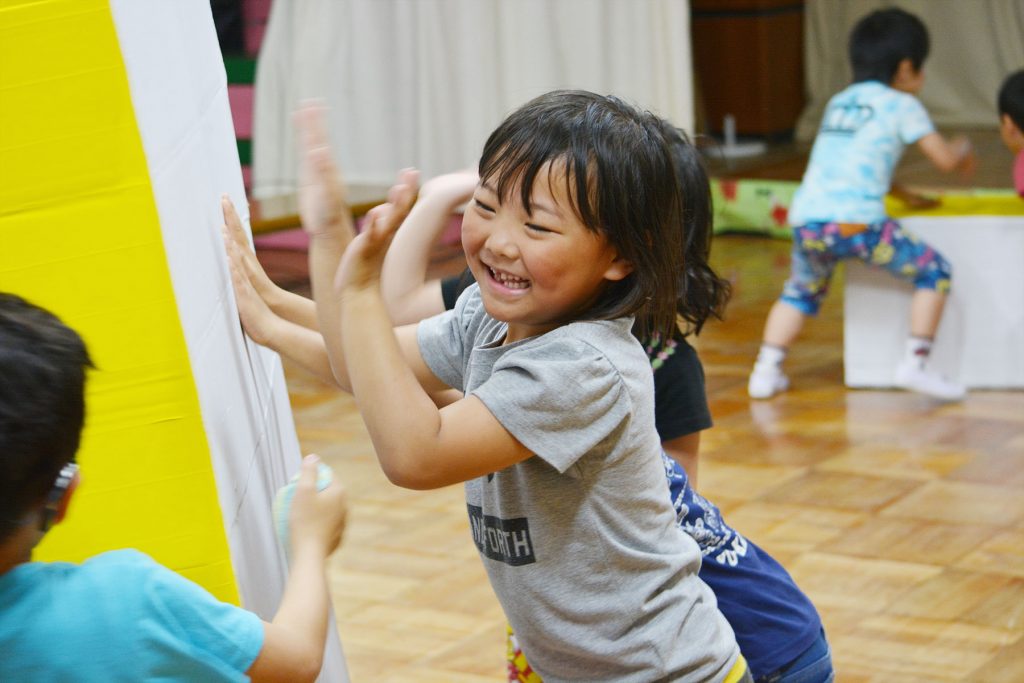 Three special “eggs” (capsules) with sensors inside were mixed with empty “eggs.” The objective of the game was to find these special eggs. If these eggs were shaken, they would make a sound. In the latter part of the program, flowers gradually appeared on the screen as the children shook the eggs, filling it with various colors. There were multiple ways the children could go about attaining the simple goal of finding the eggs; we observed how the children thought and devised strategies to achieve this. 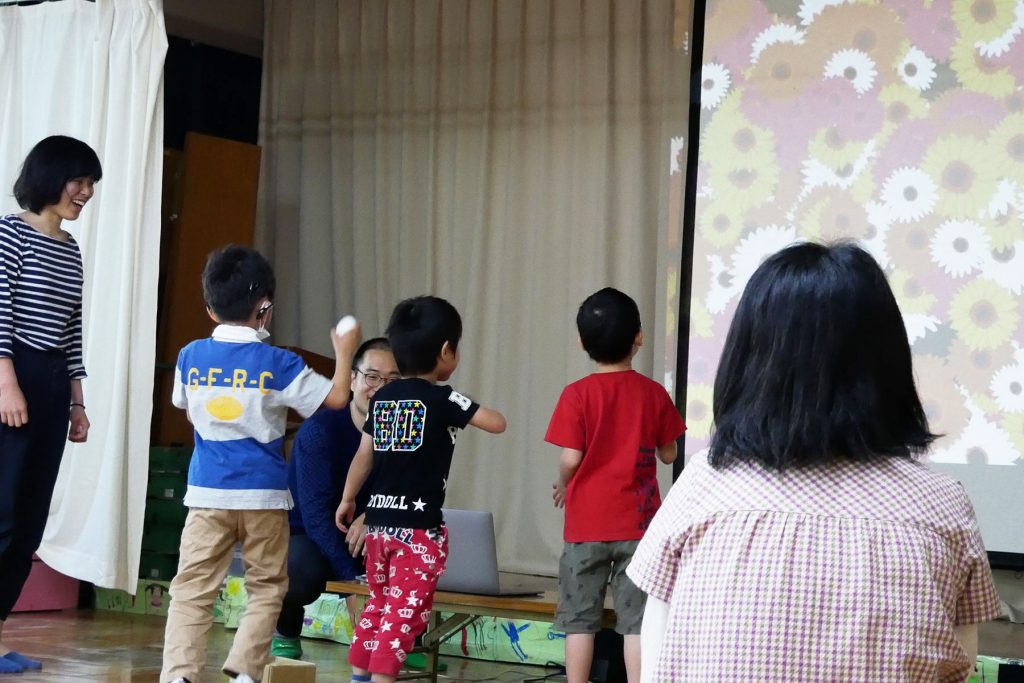 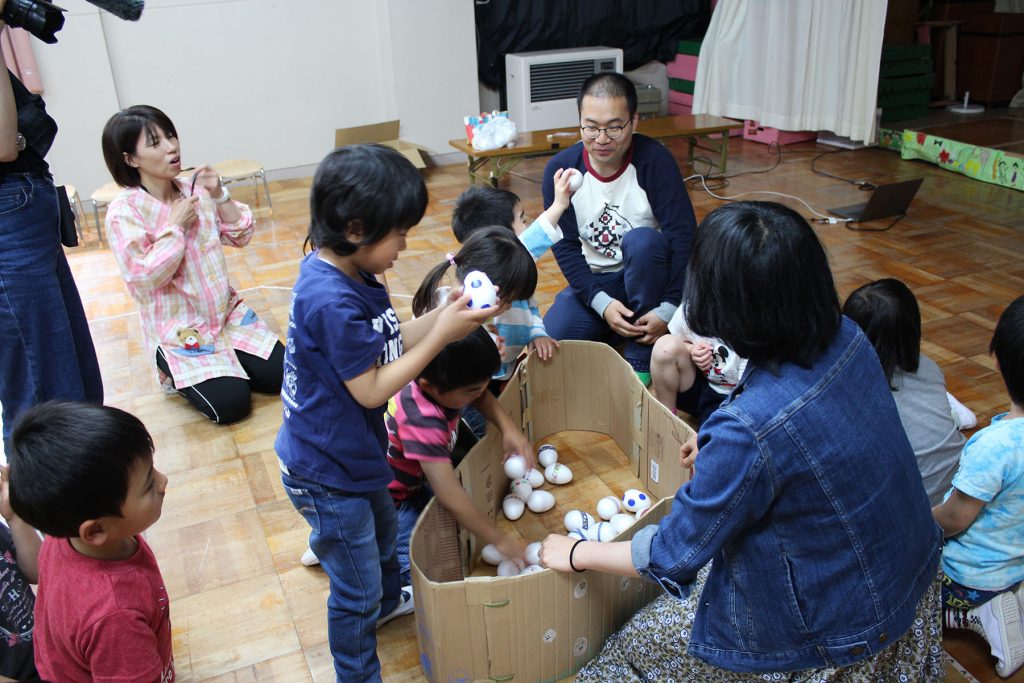 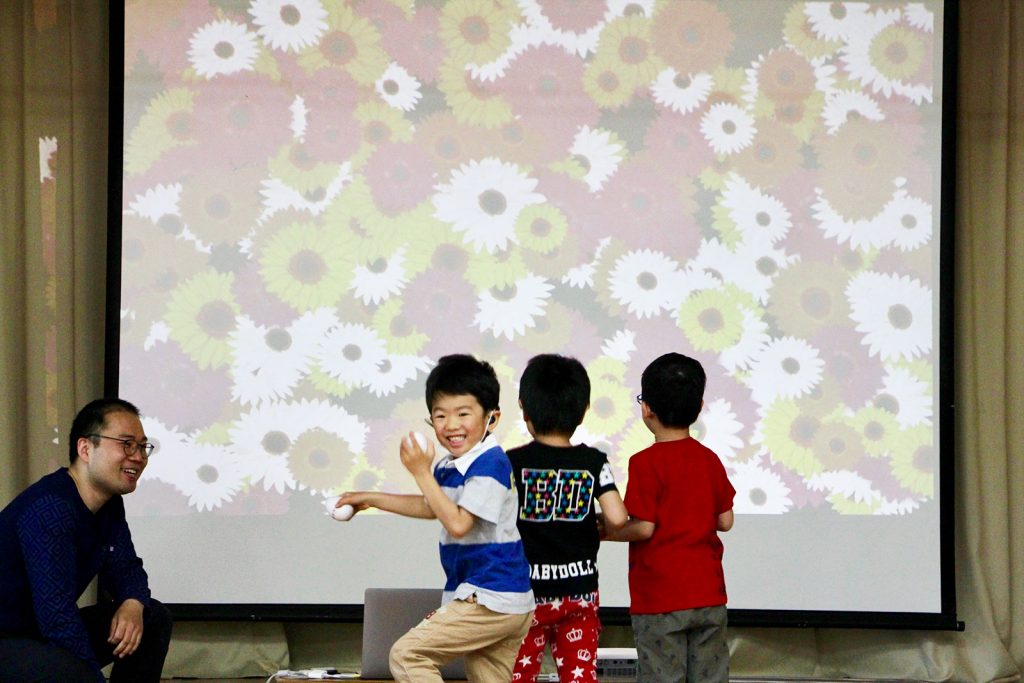 The children wore motion sensors, and a program produced simple words like “hello” when they performed specific gestures. After putting on the sensors, the children moved as directed by a facilitator, playing with the gestures and their corresponding words. Though these were familiar, everyday movements, the children seemed to discover something fun and interesting within them. 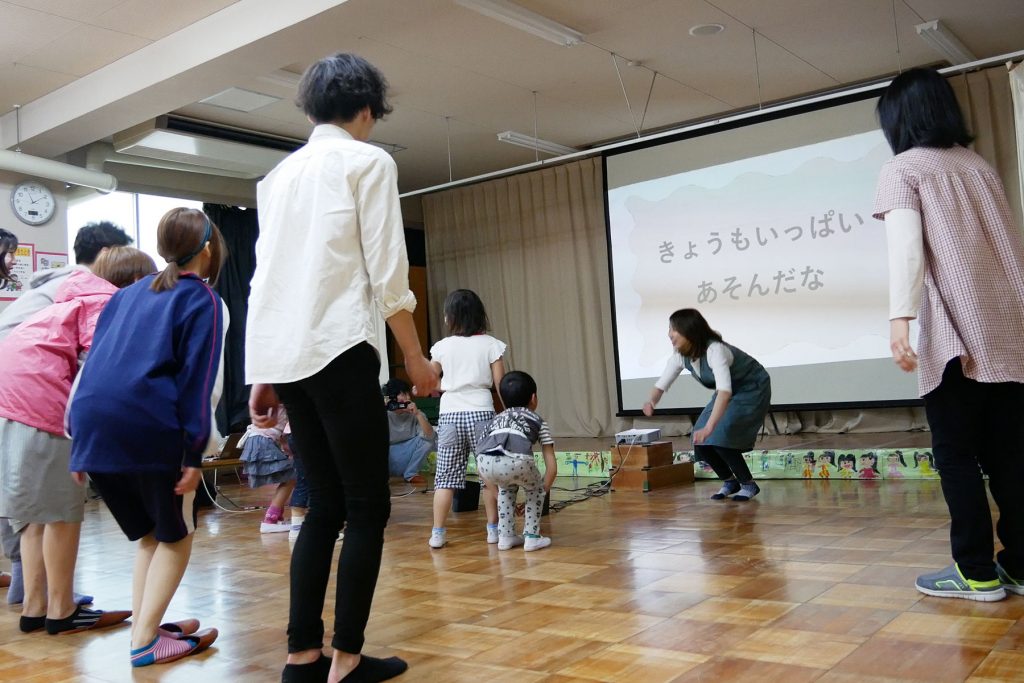 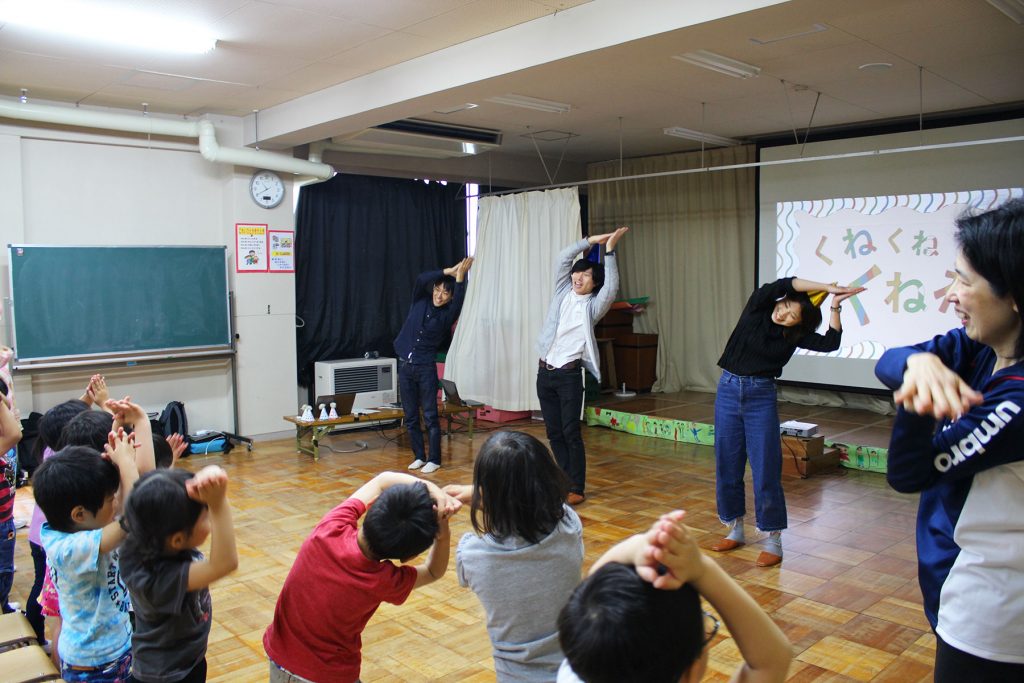 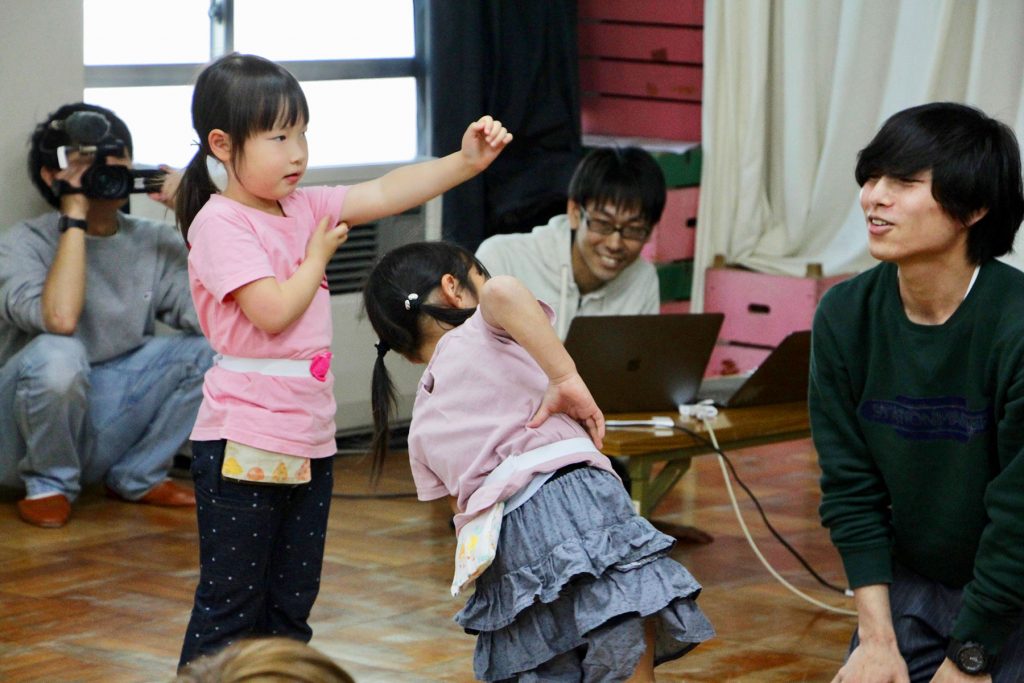 This group split the children into two groups of five people. Each group was given a large cloth sheet with sensors attached to it. Two shapes were projected onto the screen: a square and an equilateral triangle. Each shape had been assigned to one of the sheets, and when children would shake the sheet, the position and size of the corresponding shape would change. From the simple premise of shaking a sheet to increase the size of an image, we observed very dynamic behavior from the children as they worked together and discovered what to do. 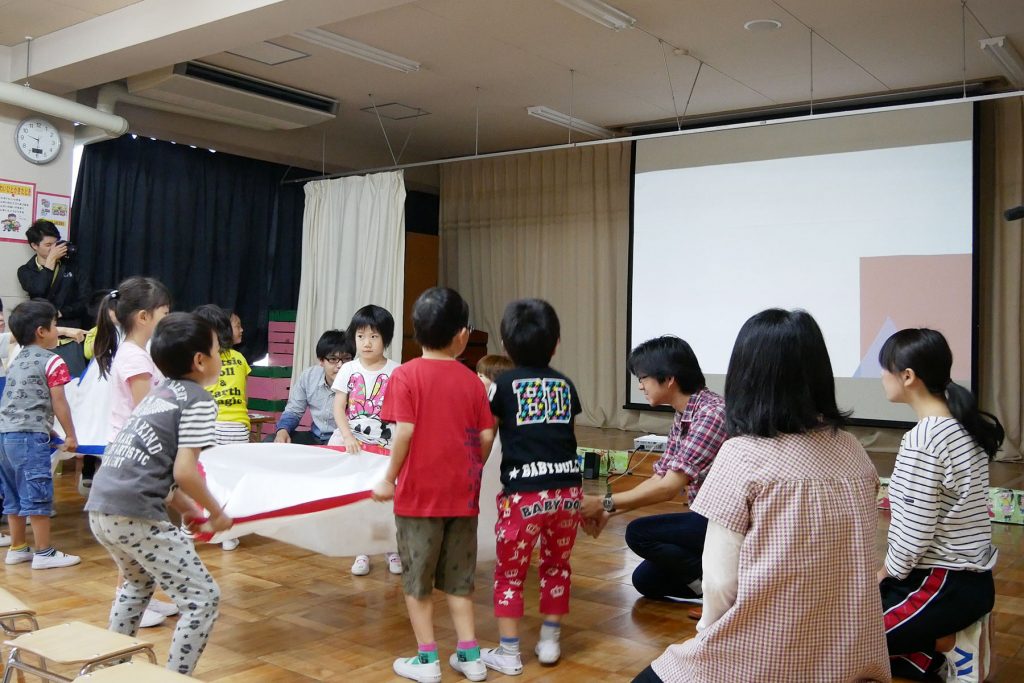 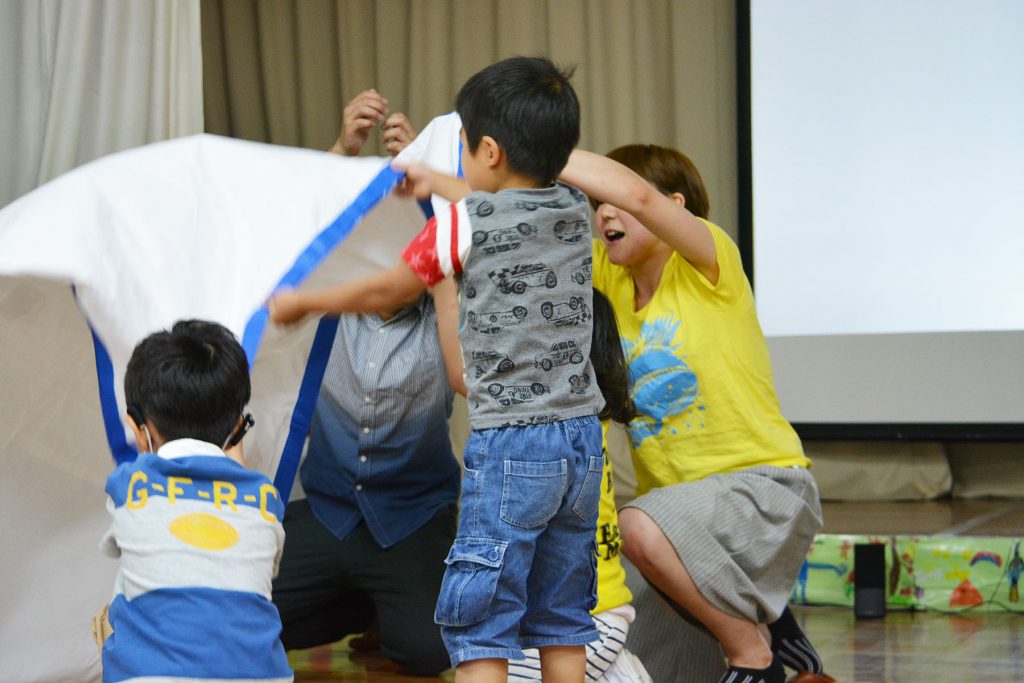 On the final day of the class, students reported their activities to the school, incorporating videos taken during the workshops. There were many elements for the students to consider; such as: how did the children use the sensor-outfitted objects? How can we use these sorts of objects to create a space in which children can think for themselves? We did not approach this class trying to create a game with rules; rather, we focused on creating a situation in which a state of play could be spontaneously generated as participants used their bodies. Presentations varied widely from group to group, with some using their findings from the first workshop to make improvements for the next, and others sticking with their ideas as generated in class.

Important information regarding the entrance examination (Updated as of November 24, 2021)

About the Intensive Course for Persons with Work Experience